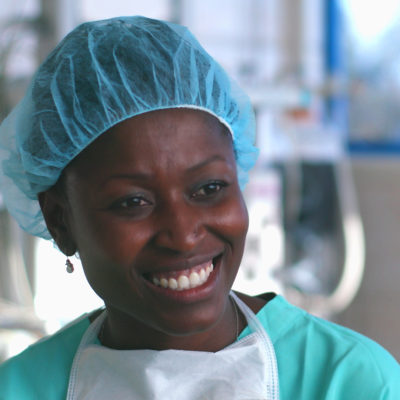 Gynocare has the distinction of becoming the ﬁrst ofﬁcial ﬁstula repair surgery training site in Kenya certiﬁed by the International Federation of Gynecology and Obstetrics (FIGO). Since 2014, six Kenyan doctors have completed FIGO training through an Action on Fistula scholarship and are now accredited as trained ﬁstula surgeons.

Dr. Charlotte Kaliti, a registered OB/GYN and experienced surgeon, was the most recent to complete her FIGO training there, funded by our Action on Fistula initiative in Kenya. Based in Nairobi, Dr. Kaliti grew up on the coast and is committed to helping women in her home region. In December 2016, just months after completing her fellowship, she led an outreach visit to Mombasa, on the coast, where she treated 15 women.

“Women in my community have suffered a lot,” says Dr. Kaliti. “And they are still suffering even now, and that’s a reason why I decided to go into women’s health.” It was during her residency 10 years ago that she ﬁrst became interested in ﬁstula surgery. She says: “I was amazed that these women can actually be assisted—undergo surgery, be repaired, and go back to a normal life. Some of them, you know, get to be married after they’ve been divorced and separated, they are able to go to church, able to go and do whatever business they can do to have a living. And that’s something that’s really encouraging.”

This story originally appeared in the Winter 2017 edition of our newsletter, Transformations.