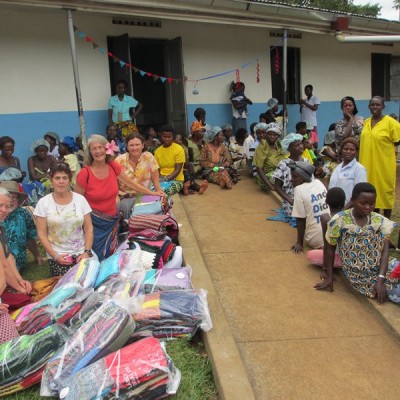 The Chamberlains interest in fistula began by chance 16 years ago when their daughter Annie was writing a college report on male circumcision. Her mother Linda suggested she also read up on female circumcision, and Annie eventually forwarded Linda a website on the subject that would change their lives forever.

After extensive research on female genital cutting (FGC, also known as FGM), the Chamberlains wanted to do something…but what, they wondered? They started by sponsoring a girl in Kapchorwa, Uganda, and eventually went to visit her. By the end of their two-week visit, they were sponsoring several other girls. They returned again to Uganda for a month later that year to teach French and English at a small school in Mukono. They have traveled to Uganda every year since to follow the girls’ progress and immerse themselves in the beauty and culture of Uganda.

In 2011, the Chamberlains’ path took another turn when, once again, their daughter Annie forwarded them a powerful link, this time to A Walk to Beautiful, a documentary highlighting the devastating condition of obstetric fistula. After watching the film about a hundred times, Linda and her husband Will began looking for a hospital in Uganda that repaired fistulas. Eventually, they were able to locate one in the town of Masaka called Kitovu Hospital.

Working with their established connections in Kapchorwa, they were able to find seven women from extremely rural areas who were suffering from obstetric fistulas and arranged for their transport to Kitovu Hospital. These women underwent successful repair surgeries and were able to return to their villages dry and happy for the first time in years.

Since then, the Chamberlains have returned to Kitovu Hospital several times to help fistula patients build their skills through education and knitting. They reached out to Fistula Foundation in order to connect us with the work of Kitovu Hospital, and today we are grateful to be supporting Kitovu Hospital’s amazing work to transform the lives of women suffering from obstetric fistula in Uganda.

Thank you Linda and Will Chamberlain!

Tags: A Walk to Beautiful, Kitovu Hospital, our supporters

View all posts by Fistula Foundation →