Like many 17-year-olds, Brenda has dreams for her future.

But last year, she had to drop out of school. Not because she had gotten pregnant at 16, but because of an injury she sustained during childbirth. She labored at home for two days before going to the hospital. When she was discharged, she found she was leaking urine uncontrollably. She had developed an obstetric fistula, an injury caused by prolonged obstructed labor. Unable to find treatment, she felt hopeless.

Her mother stayed by her side, her heart aching for her daughter, her sixth and last child. Grieved to see Brenda suffering, she wondered what would happen to her daughter if she were unable to get help. Fortunately, they didn’t have to wait more than six months to find out. Brenda heard about a newly opened fistula hospital on the local radio station and immediately called the hotline. In March 2016, she received free fistula repair surgery at Kisii Gynocare Fistula Center in Kenya.

The hospital is the seventh and most recent addition to the Fistula Treatment Network in Kenya. The surgeon, Dr. John Omboga, was trained through the Action on Fistula initiative and is committed to providing fistula repair surgery in Kisii, his home county. In just six weeks after the facility opened its doors in mid-March, Dr. Omboga had already performed an impressive 54 surgeries, giving women like Brenda the chance to resume their lives.

Two days after her surgery, while recovering on the ward, Brenda is once again envisioning her future. Her dream is to become a nurse. Encouraging her, Dr. Omboga says that if she works hard, she could come back and work here at the fistula center when she graduates, helping other women who have gone through what she has. Brenda just smiles, and her mother gently puts her arm around her daughter’s shoulder. 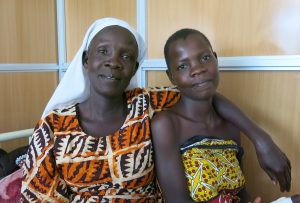 We’re Making a Difference in Kenya

Our countrywide treatment networks in Kenya and Zambia are flourishing, and we’re just getting started.