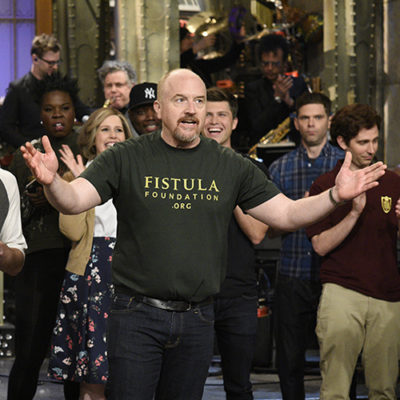 On April 8, 2017, Emmy Award® winner, comedian, and actor Louis CK was a guest host for NBC’s Saturday Night Live. During the closing credits of the episode, he wore a t-shirt bearing the Fistula Foundation website! 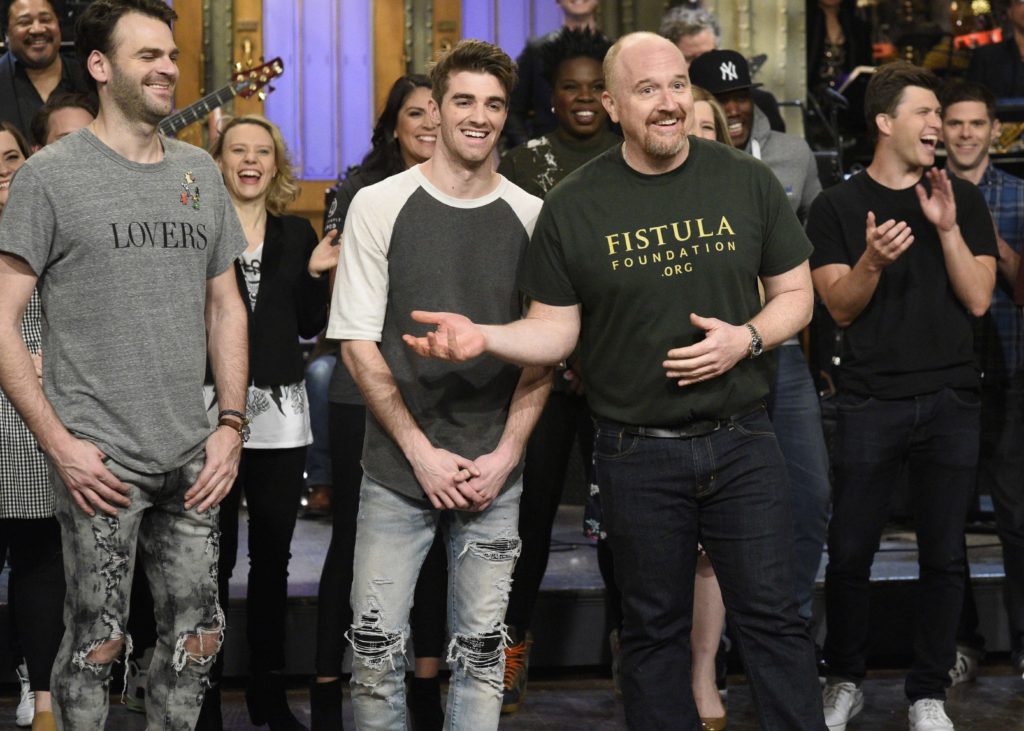 It’s not the first time Louis CK has supported Fistula Foundation. It all started back in 2011, when we received an unexpected phone call from our payment processor, alerting us to an unusually large gift being made to our organization. The culprit? Louis CK, attempting to make a $20,000 donation. And then for an encore, he followed up with another $20,000 donation.

CEO Kate Grant wrote about his incredible gift in the Huffington Post:

And then in 2014, Louis CK’s tweet about Fistula Foundation sent so many people back to our website, it crashed. But we were back up and running within minutes, and ecstatic that he had brought so many new people to our issue. 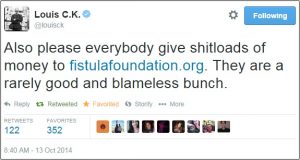 On May 18, 2016, Louis CK was featured on a special Power Players edition of Jeopardy!, winning $50,000 for the charity of his choice, Fistula Foundation. Our Board Chair, Bill Mann and our CEO, Kate Grant, were in attendance to cheer him on.

In this Huffington Post article, Kate Grant wrote about the impact of Louis CK’s winnings for poor women in Africa and Asia, and how the money will help them receive life-transforming surgery for their childbirth injury, obstetric fistula.

‘My Charity Is Fistula Foundation, Alex’

Those five words from Louis CK will change lives. Last night on Power Players Jeopardy Louis played for Fistula Foundation and crushed it, winning $50,000, money that can help nearly 100 poor women in Africa and Asia injured in childbirth get life-transforming surgery. They taped the show last month in Washington, DC.

The Chronicle of Philanthropy featured Louis CK’s TV appearance in support of Fistula Foundation on TV in a case study:

Case study Near the end of 2011, the Fistula Foundation surprisingly received $40,000 in gifts from Louis C.K. – making it one of several charities the comedian would donate more than a quarter of a million dollars to that year from the proceeds of one of his standup specials.

We are extremely grateful for Louis CK’s longtime support of Fistula Foundation! Check out the latest of episode of Saturday Night Live featuring the comedian at this link.