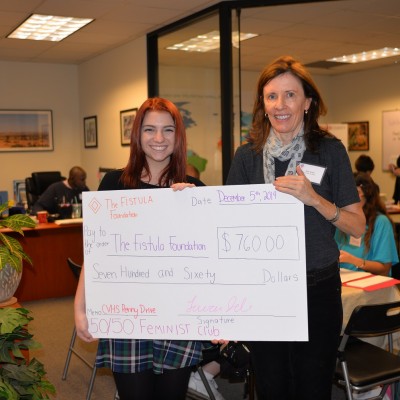 Lauren first learned about obstetric fistula from her older brother. “I realized that this is a really important issue that people aren’t really aware of. And not only are they not aware of it, but it’s so easy to fix.”

A senior at Castro Valley High School, Lauren had founded the 50/50 club, which met regularly to discuss ways they could help change the way girls and women are perceived. She realized that obstetric fistula would be the perfect issue for her club to focus on, and knew just how to help.

Each year, clubs compete to sponsor a school-wide penny drive. After a competition, her club won and they were able to use the opportunity to raise funds while highlighting the problem of obstetric fistula. At the end of the fundraising drive, her club had raised almost enough to fund two fistula surgeries.