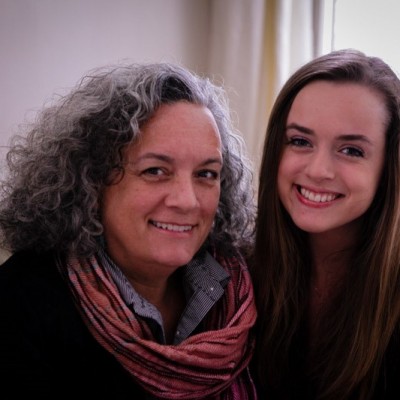 In the spring of 2013, filmmaker Elisa Gambino and her husband, Neal Broffman, visited Gondar University Hospital in Ethiopia with partners Fistula Foundation and Johnson & Johnson. Elisa and Neal were there to interview and film the fistula treatment work we both supported at this facility. It was the first time she had met with obstetric fistula patients and the visit moved her so deeply that she shared much of what she saw and learned with her daughter, Sofia. 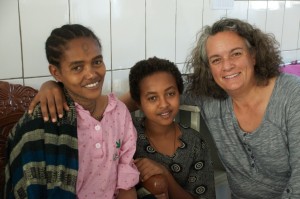 Elisa poses for a photo with Workinesh and her daughter, Tigist.

“The first fistula patient I met was Workinesh,” Elisa recalled of her trip. “She was at the hospital with her daughter, who was Sofia’s age at the time. It was very difficult because I thought, ‘Here is a mother with a daughter my daughter’s age and what she’s going through is so far removed from my life and the things I have to think about.’ But despite our different lives, I know that Workinesh wants the things for her daughter that I want for Sofia. It has been two years and I continue to think of her often.”

Sofia was inspired, and wrote to us: “Hearing their experiences filming at three hospitals in Ethiopia and Tanzania and learning about the hardships women with this condition face inspired me to raise awareness. I’m a junior at an all-girls middle and high school in Atlanta. Since obstetric fistula affects women and girls, what better place to start talking about it than at my school?”

Armed with Fistula Foundation’s one pager, stories about how fistula surgery changes women’s lives and a collection of recent Foundation newsletters, Sofia got to work. She spoke with teachers and with members of the Service Club at her school about starting a school-wide fundraising campaign, and started to spread the word. Donations began to trickle in, but Sofia soon realized that she could raise more money faster by asking people for larger donations. So, on a December weekend just ahead of Christmas, Sofia enlisted her mother’s help in baking a favorite family recipe for cranberry cakes. Sofia’s local florist donated cellophane wrapping and her neighbor donated beautiful bows to make the cakes look festive. Sofia offered the cakes in exchange for a donation of $25 or more – and the donations started flowing! 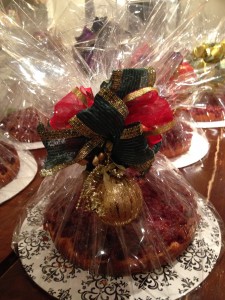 By the end of the year, Sofia had raised over $500 – putting her well on her way toward reaching her goal of funding surgeries for three women. She chose to support three women because raising $1,250 felt like a challenge, but still a reachable goal.

“Sofia managed this project, but we made the cakes together, we brainstormed together. Helping women with fistula helped us, too, as a mom and teenage daughter, to have a common goal. And a lot of the time our goals aren’t always the same at this stage in life, so that part of it was really nice! I love how thoughtful my daughter is. She thinks about things with a very kind heart. It was fun to see that expressed in new ways through this project,” said Elisa.

Sofia’s fundraising continued again in March as she took advantage of International Woman’s Day on March 8 to remind her classmates to think of the women who needed help most. She will continue her efforts until she meets her goal. And her advice for someone thinking about following in her footsteps? “Do it! You’re helping people, why wouldn’t you do that?”

Click here to watch a short video of Sofia and Elisa sharing their story.